Some people dream of a cruise around the Mediterranean. Others want to bask in the Jamaican sun while sipping something fruity with an umbrella in it. Not Paul Souders. Not this time, anyway. What started out as a, perhaps, fleeting thought, turned into an adventure that would reward him exponentially.

A professional wildlife photographer by trade, Souders dreamed of an excursion that would take him all the way to the Canadian Arctic to capture images of the elusive polar bear in its natural habitat. At this point, Souders had been to over 65 countries shooting the fauna of the area including penguins, lions, walruses, dolphins — all things large and small, on land and sea. For most, this dream would be permanently housed in the section of the brain that stores one day I’ll do this thoughts that never come to fruition. For Souders, this dream was completely within reach and all he needed was a plan.

The course was anything but simple; navigate thousands of miles of isolated and dangerous water along Hudson Bay’s western coast, by way of boat. Not a journey for the novice boatsman or weary, seasick traveler. We’re talking icebergs, unforgiving terrain, and unpredictable weather. But also crystal clear water, breathtaking views, majestic wildlife, and bragging rights for years to come. So now the question was, how? 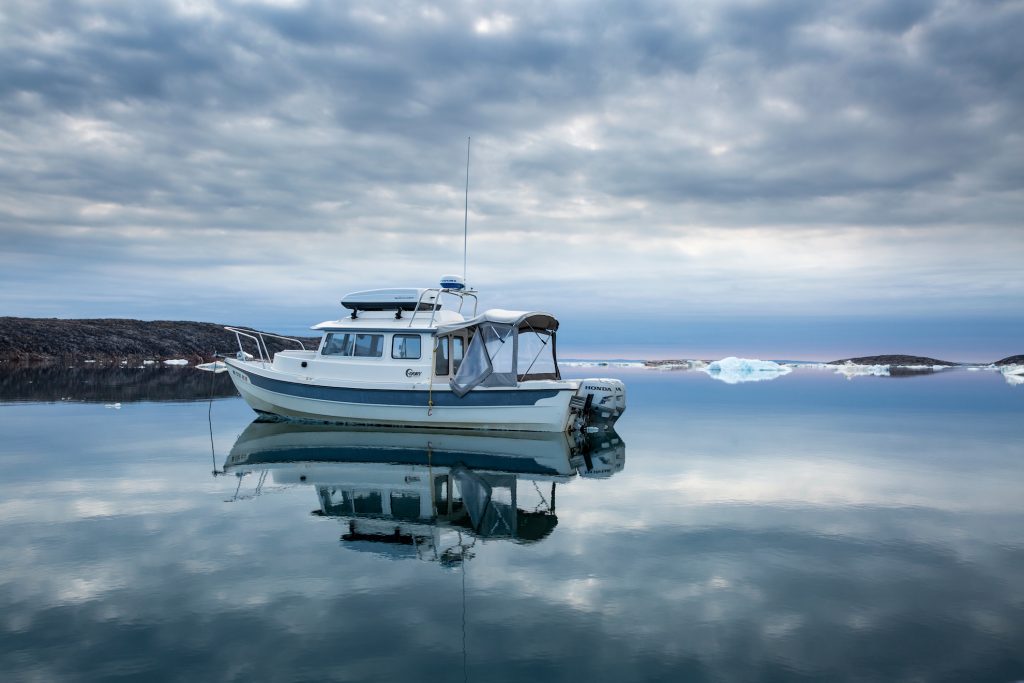 Enter C-Sick, a 22’ C-Dory Cruiser Souders bought from a private owner who babied her and kept her in pristine condition. It was a case of love at first test drive. Admittedly, Souders didn’t even negotiate and paid full asking price. The heart wants what the heart wants. Perhaps it was an unexplainable cosmic connection between man and vessel — although more likely it was the safety features and durability of the C-Dory that attracted him. Outfitted with two Honda 40hp outboard engines, a two-burner stove and heater, an eighteen-gallon freshwater tank, a sleeping berth, and the structure of a sea tank, C-Sick was just the companion Souders needed to survive the rugged arctic waters and frigid temps. Special note: C-Sick did come with a portable commode that Souders quickly replaced with a five-gallon bucket. This man’s bravery and ruggedness knows no bounds.

The actual journey itself, as told — and shown — by Souders himself in his book Arctic Solitaire: A Boat, a Bay, and the Quest for the Perfect Bear, is extraordinarily epic and spanned four summers from 2012 to 2015. He traveled the vast majority of nearly 6,000 miles at a displacement speed averaging about six knots — no blasting along at cruising speed here. Dare we say Souders is the Indiana Jones of the Canadian Arctic? Armed with a camera and parka — instead of a whip and hat — with just the right amount of chutzpah and humor, his book is equal parts breathtakingly beautiful, entertaining, witty, and adventurous.

Souders goals included finding “polar bears living unafraid and standing unchallenged at the very top of the food chain”. He wasn’t looking for a sad, defeated zoo bear. Nope. He wanted to see them living, hunting, and swimming. And he did.

You might think our favorite photo from the book is one of C-Sick. While they are all incredible and unlike any images of C-Dorys we’ve seen, our favorite has to be the photo that won him the 2013 National Geographic Photography contest. It’s magnificent. It’s eerie. It’s real. It’s gobsmacking.

The result of Souders’ odyssey is a lifetime of stories and incredible photos. With his permission, we’re able to share some of these photos with you. If you’d like a signed copy of his book, check out his website.

Cruise, fish or dive in any Waterway

These boats will become your trusted partner, taking you on the type of adventures that create long-lasting memories.